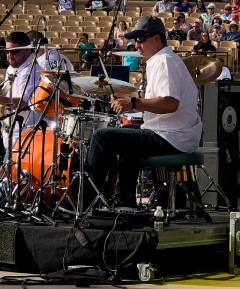 Jesse started on drums at a very young age. In the 1970’s his father Ray Cavalier Jr was the drummer for Bob and the BlueJays so music was always in the home. Drums and drumming came naturally to him. At the age of 12ys he filled in for dad when he became ill.. In the mid 1980s he was hired to play drums in the Daniel Silva band which played all thru high school doing local clubs parties and weddings etc.... In the mid 90’s  he met Marty Zamora and won the drummer throne with him in the STRANGERS  then on to Marty and Triple Shot! He and Marty founded the late 90s local rock band called ODD MAN OUT! with phenomenal success around the Albuquerque area!. Jesse went on to play with legendary singer AL HURRICANE where he did a 17yr run until his Al’s passing. Jesse has also performed with Lorenzo Antonio and Sparx. He is now reunited with his old buddy and Greatest guitar player ever.. Marty Z!!!.

He is the OG TripleShot drummer!!!!!